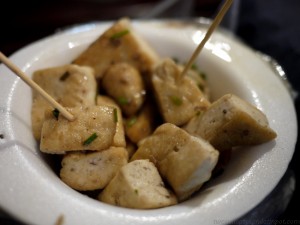 The things we do in the name of investigative eating! Last night I finally bit the bullet. And the chòu dòufu, so to speak. It probably seems crazy that it has taken me three months to pluck up the courage to actually do something as simple as sampling tofu. But the assault inflicted on your olfactory senses by this very popular Shanghainese street snack is not something you can adequately explain to anyone. At least not without a dead pig and some poop to use as a scratch-and-sniff prop. Like walking behind a sweet old lady in a shop when she lets off a silent-but-deadly fart, the smell accosts you when you least expect it. You’ll be innocently crossing a street or rounding a corner when BAM! Is someone… frying human excrement?? If you could somehow solidify the breath of a halitosis sufferer who has just licked the sweaty butt crack of a hydrophobic garbage truck driver coming off the end of a hot summer’s day shift, you would have some idea of what these fried cubes of fermented tofu smell like. But when in Rome right? At least it’s plant related and didn’t wag its tail at some point. Fresh tofu is fermented in a brine containing fermented milk, vegetables, dried shrimp (in non-vegetarian versions), amaranth and mustard greens and herbs. Fermentation can take up to 3 months and the tofu is then cubed and fried on a cast iron plate with herbs and spices. The smell is so rancid that stories claiming that rotten meat and dead flies and even actual human faeces is used in the fermentation process are easy to believe! Apparently when it comes to chòu dòufu, the smellier the better. But I was assured that, like with durian fruit, once I get past the first bite, I would love it. “It doesn’t smell once you eat it!”, they said. “Just think blue cheese and you’ll love it!”, they said. Well, they lied. I managed four bites and I still thought it was vile. Yes, it’s cheap. Yes, it’s silky, but crispy and warm and salty. But it still smells like poop going down. I think I will have to change the tagline of this blog to “I make the mistakes so that you don’t have to”. But there are those who absolutely love it and swear you are only a true Shanghainese when you start craving stinky tofu. For now, I am happy to stay a boeremeisie and crave biltong. 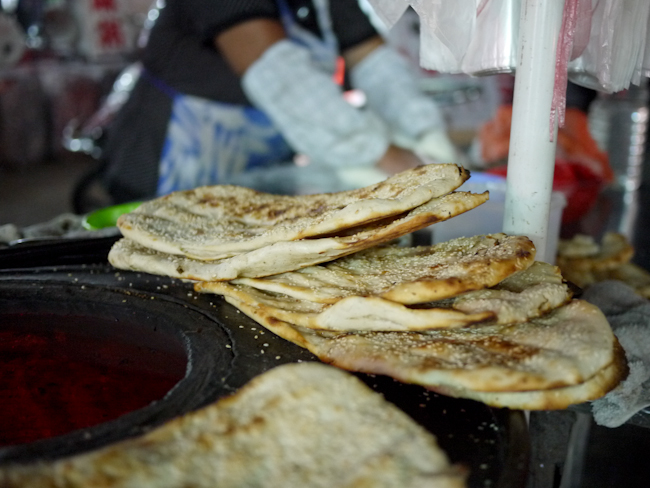 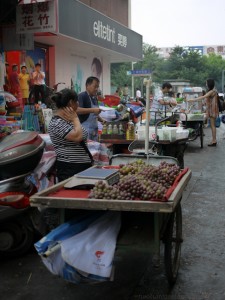 That said, Shanghai street food (and street food in Asia in general) is fresh and tasty and very, very good. And it’s incredibly cheap. For around 20元 (US$3), two adults with healthy appetites can eat till they want to pop. Above all, it is safe. We have eaten our fill in China, Thailand and Vietnam and have yet to get sick. And as I have mentioned before, you might not always know what you’re eating, but I can guarantee you that you won’t unwittingly eat dog – beside it being far too expensive for the average street vendor, these days most of them prefer petting their domestic animals to seasoning them and then roasting till just done. So tuck in with abandon and don’t be scared to make mistakes. Street food is how the masses eat, whether it’s from a food cart attached to a bicycle, a basket hanging from a biǎndan across a little old lady’s shoulders, or sitting on undersized plastic chairs outside a store front. Amenities are limited to the essentials. There might be a scale, a propane tank or little coal fire if they need heat and a naked light bulb if they’re really fancy, but don’t 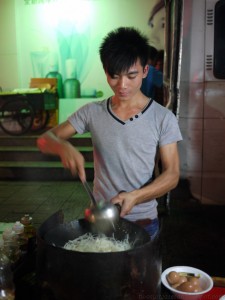 expect refrigeration. The concrete cuisine you will find when you hit the streets will of course depend on where you are. Specialities differ from region to region, city to city and even from district to district. In Shanghai, shengjianbao is ubiquitous, but there is so much more nosh on offer, some of it surprising. Who would think that one of the tastiest naan breads I’ve ever had could be found in a little alley in Qingpu Town. The thin, crisp and chewy loaves are kneaded on the spot by the mom, sprinkled with sesame seeds (a little nod to where in the world we are) and then baked in an oven made from an old oil drum by the son. A little further down a small shop sells Chinese style fried chicken so crispy the colonel would return from his grave to get the secret recipe if he could. If you’re counting calories (and yes, you can stick to a diet quite easily here), you can tuck into subtly spiced, tender chicken drumsticks grilled over a coal fire. For the more adventurous, there is all manner of meat on a stick – from tender lamb kebabs and whole, tiny birds to skewered sausage and squid with a spice that packs a tremendous punch. Friendly vendors with smoking woks will whip up a mean chow mein for you – just nod your head when they point at the ingredients you want and shake your head at those you don’t. And if you like things only a little spicy, I suggest you shake your head vehemently when it comes to the chilli! 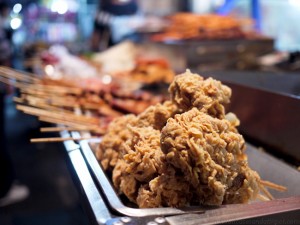 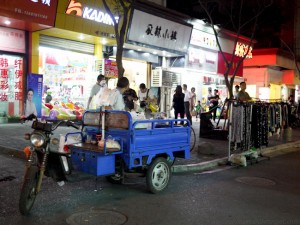 And when you’re almost (but not quite) stuffed, save a spot for a piece or three of  warm, prepared-on-the-spot peanut and black sesame brittle. The smell of roasting peanuts and sesame seeds and slowly caramelising sugar that hits you just when you think it is, sadly, all done is enough to make you start your street food adventure all over again.

The few things I mentioned here were eaten in just one night, after a stroll down just one street (muffin top explained). But there is so much more to taste and experience when you hit the streets in China. Some of it will be really, really bad, but for the most part it will be very, very good. Vendors often move to where the crowds are and you won’t necessarily find the same person in the same spot twice. So my suggestion? When the opportunity presents itself, grab it. And if you’re not sure where to go, just follow your nose. If you smell stinky tofu, drop everything and run.

I have been trying to diet. Really I have. But after one week, the only thing I have managed to lose is my sense of humour. It might be so that 25 is the new 35,  but my face didn’t get the memo and neither did my body.  To be fair, I was warned about this by those older and wiser than me: When you hit 35, things will go a bit pear shaped. Or, more accurately, apple shaped. The answer to “Where did my twenties go?” is indeed “Straight to your muffin top, dearie”. But I didn’t really believe them. How do you go from one shape to the next overnight? And yet it seems like that is exactly what happened. One minute I was worrying about how best to hide my saddle bags and the next thing I knew I had a fanny pack I had to camouflage. Of course it doesn’t help that I have a few things conspiring against me: Firstly, there is limited height into which I can fit any excess weight. Secondly, I have bad knees and a bad back which means many exercises are verboten. (I am possibly the only person in the history of the world who, as a little girl, had to face the humility of failing grade 1 ballet because my teacher, Miss Hazel, didn’t think my legs could handle moving to grade 2 yet. I don’t think “loser” adequately conveys the extent to which you are a sporting failure if you can’t pass first grade ballet!) And lastly – and here is the clincher, possibly exacerbating all of the above – I don’t like veggies. At least, not the type of veggies that are good for you in any way. Caramelised in butter and sugar like the Afrikaners like to do them? Sure! Drenched in a creamy, cheesy sauce? Sure! Steamed and healthy? Not so much. So it came as quite a surprise to me when I thoroughly enjoyed a plate of braised aubergines on a trip to Zhujiajiao recently. Granted, in one dish there is probably more sugar than in a Twinkie and more salt than in John McEnroe’s headband, but at least it’s a vegetable and it’s low in fat. The problem with eating anything in China worth writing about though, is that the recipe of said dish has inevitably been passed down from generation to generation and is a secret guarded more closely than the identity of the Stig. Of course that means that I simply have to wait for a disgruntled ex-employee to spill the beans in an otherwise boring book, or I could consult the world’s greatest oracle. So to Google we go! This recipe has been adapted from www.seriouseats.com. Bland veggies like aubergine and courgettes work well to absorb the flavoursome sauce, but it would work just as well with peppers and onions. 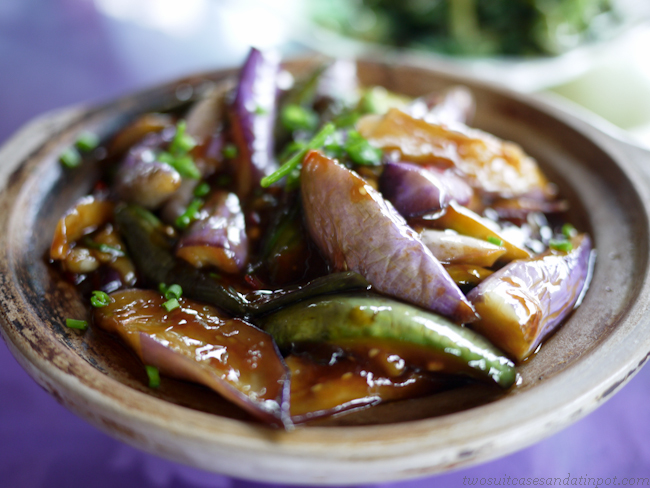 1/4 cup Shaoxing rice wine (I felt a bit lost in front of the rows and rows of rice wine in the shop, so eventually settled for the prettiest bottle, which turned out to be green plum wine. Oops. If you can’t get your hands on Shaoxing wine, you can use Japanese sake or dry sherry or even dry white wine. When using the latter, add a little more sugar during the cooking process. END_OF_DOCUMENT_TOKEN_TO_BE_REPLACED 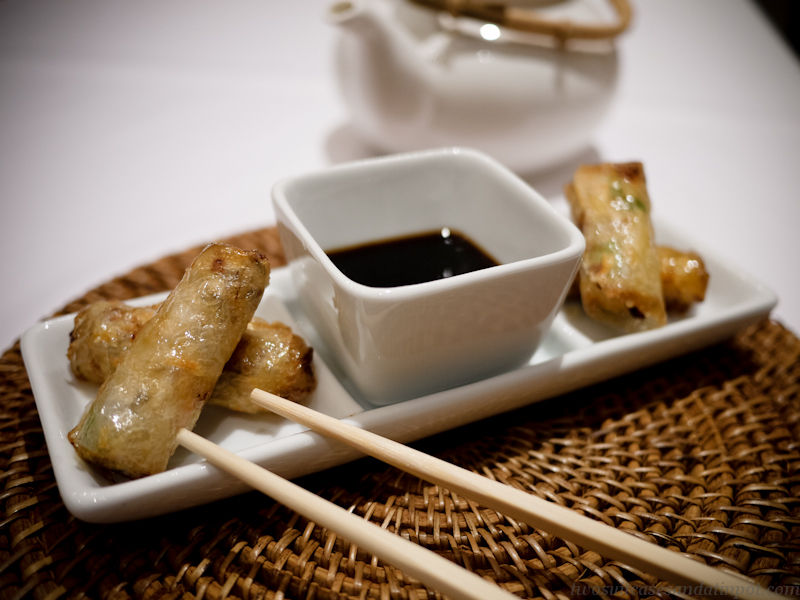 Anyone who has ever had the success rate with rice paper wrappers that I used to have has probably already navigated away from the page in total disgust, trying to erase the nightmarish visions of gloopy sheets of glutinous slop sticking to the bottom of the pan, the side of the pan, the slotted spoon in the pan and everything else within a 3 meter radius. The end result of trying to make anything with rice paper is usually a pitiful little clump of oil logged 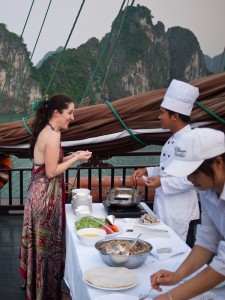 veggies with a shredded piece of wrapper stuck pathetically to one end, clinging on for dear life like a snotty tissue. Enter the chef on board one of the Bhaya Cruises vessels to clear up all the confusion in a cooking class on deck. What I thought was revelation shining down on me in amber hued rays as we cruised around Hulong Bay in Vietnam turned out to be just a break in the passing storm cloud, but the discovery was no less eye opening. Why, why, why has everyone always said you must dip the wrappers in a bowl of water? Worst. Idea. Ever. Unless you like having sticky bits of rice paper stuck to your plates, working surfaces, fingers and eyebrows. No. The secret is to place the rice paper wrapper on a wet tea towel and just pat it lightly. It should be just soft enough to become pliable without ever becoming sticky. Once you have the knack of it, the rolls can either be deep fried in oil or you can serve as is. If you choose the latter option, serve a dipping sauce with the rolls to make them softer and easier to eat. These have been claimed to be the best spring rolls ever made. The claimants were my friends, but don’t let that diminish their observational powers for you. END_OF_DOCUMENT_TOKEN_TO_BE_REPLACED