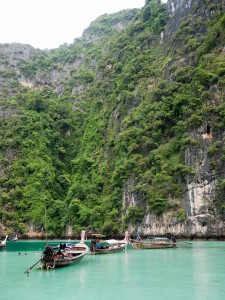 If you’re travelling to Thailand, you no doubt already picture yourself in either or all of these scenarios: 1) You’re lying supine on a white, sandy beach, slick with coconut oil, sipping a cocktail and occasionally going for a dip in a warm, turquoise sea. 2) You’re partaking in the type of hedonistic activity that will ultimately have you handing out bras in a Thai prison, a la Bridget Jones. Or 3) You’re buying bargains in a market, the stories of which will have your friends “No freaken way!”-ing at your next braai. Well the good news is you can very easily fit in all three if you have a week there!

Krabi is a small town on the west coast of Southern Thailand, on the eastern shoreline of Phang Nga Bay. This is not the pumping beaches and raucous night life of Phuket. Here you spend your hours languishing on bean bags on the beach sipping Mojito’s by day and have quiet candle lit dinners with your feet in the sand by night. It is a more convenient base for day trips to Koh Phi Phi and Railay than Phuket.

Railay is, in my humble opinion, the undiscovered jewel of the Andaman Sea. Sheer cliffs have their feet firmly planted in long, white beaches and there is not a lounger in site. There are over 700 climbing routes in the area and even though it is not an island, the cliffs mean it is only accessible by boat.  Long boats can be chartered from the dock in Ao Nang. (Make sure your life insurance is in order before boarding – it’s almost safer travelling on the N1 in December. When we were on Bamboo Island two locals dragged themselves on to the beach after capsizing the previous night and swimming for 8 hours with nothing more than a polyester cooler box to keep them afloat! It if was my husband’s cooler, the beer would’ve sunk us.) The longboats from Ao Nang drop you off in the sea on the Eastern side of the peninsula. And by in the sea, I mean IN the sea. Depending on the tide and whether the skipper likes you or not, we’re talking thigh high at least, so dress for the occasion. There is a walkway to the western side where there are views of the rock climbers and more imposing cliffs. Mangroves grow on this side, so it’s not for beaching, but it’s absolutely beautiful none the less. From here, make your way to the right towards the cliffs. A path follows the foot of the cliff through forests and stalactites and will eventually bring you to the beach. Be sure to have a peek at Phra Nang Cave  to get your fill of phalluses (if you’ll excuse the turn of phrase). 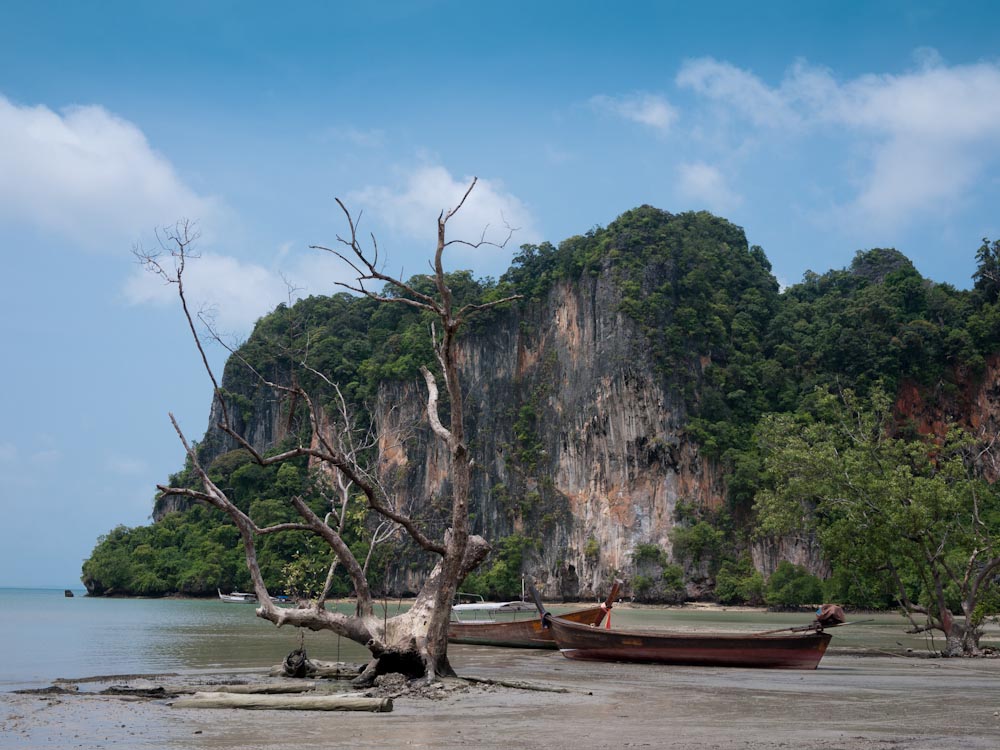 While there are a few restaurants at the main beach, I would suggest having lunch from the longboat moored on this stretch of beach. It’s really good and dirt cheap. We weren’t planning on eating here, but an unfortunate breakdown in communications meant that the fried ice cream I asked for was interpreted by the vendor as fwy wice. But it was good fried rice! This long (well, relatively long – we really are blessed with our beaches in the Cape!), white stretch of beach gives you splendid views of the limestone cliffs in the bay and – thanks to strict Krabi province laws prohibiting the use of loungers that are a blight on most Thai beaches – ample space to park yourself wherever you please. 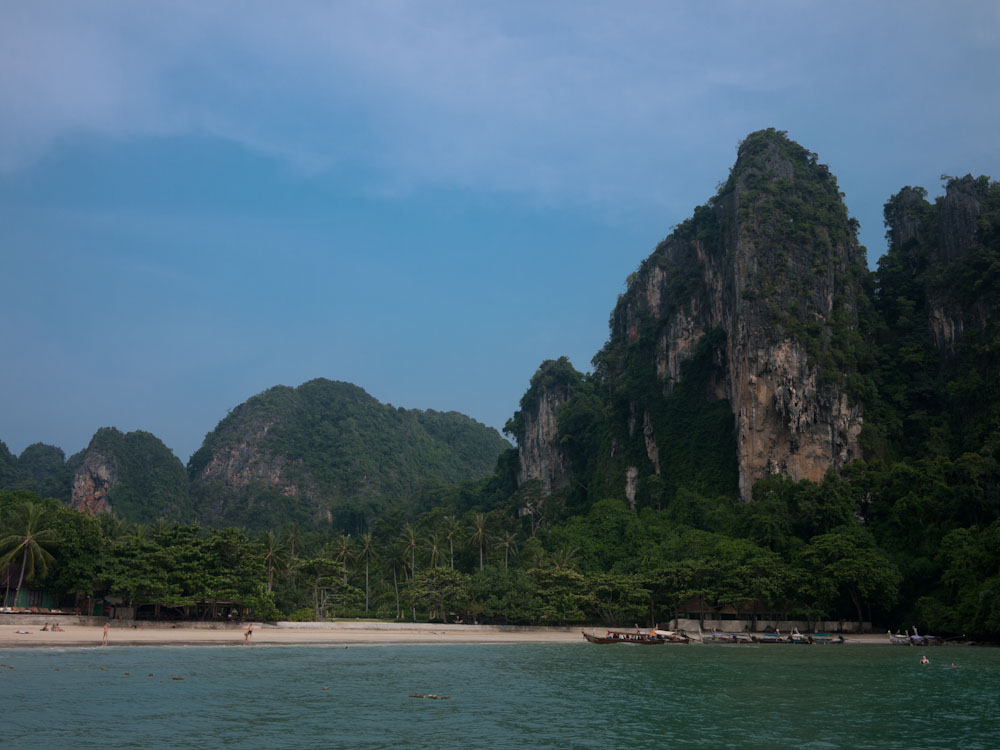 If you’re going to stay in Krabi, the Tubkaak Boutique Resort is an absolute must. It might be on the pricier side by Thai standards (you can get a room in a local hostel from around R60 per night), but seldom will someone watching the pennies be able to afford the type of place where a total stranger greets you by name at breakfast and knows exactly how you take your tea  – even if it’s “English with condensed milk please”. (Under duress I will acquiesce to one major flaw in an otherwise superb establishment – their website is in Comic Sans. But don’t let that put you off!). 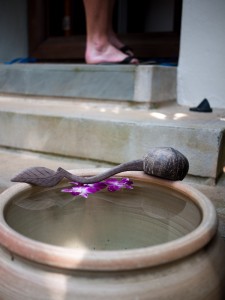 The grounds and rooms are a harmonious blend of natural elements, with stone baths in the open courtyards fed from the mountain stream that winds its way through the property and the same orchids and green canopy from your bathroom greeting you when you step out of your room. This is a great place from which to explore the surrounding islands, and they really make it easy for you. There is a shuttle in to town on some evenings where you can peruse the local night market or have a bite to eat if you’ve gotten tired of the sunset fare at The Arundina, the Tubkaak’s own restaurant. (Just kidding! No one can get tired of the food at The Arundina. But make a turn in town any way, if only to go for a Thai pancake at Rotee Yaminlah. The crisp Thai style pancakes served from this cart will make you weep for joy. Try the cheese one with mayo or just stick to good old Nutella. Okay, I hear how that sounds, but trust me on the cheese and mayo!) The hotel can also organise a variety of day tours and will shuttle you to and from the pick-up points. It’s really a good idea to go with their recommendations, as they have done the dirty work of sifting out the shysters for you. They obviously make use of the more commercial tour operators, but as I’m the type of person who prefers the anonymity of a crowd to the Kumbaya moments afforded by the more intimate operators, we were very happy with our tour – Koh Phi Phi Tours. With around 40 people to a boat it’s small enough to get to know the guy who’s parked his flip flops next to you, but big enough to avoid the loud mouth woman who wore stiletto’s to a snorkel expedition. Tours depart at 8 o’clock, giving you enough time to have breakfast at the hotel. You can choose from a wide variety of Western and Thai dishes from the set menu or buffet or both (did I mention how much I love this place??). It might seem a bit weird to your pallet at first to start the day off with noodles stir fried with prawns, squid and lettuce, but you must have the Mee Hokkien for breakfast at least once! Their Phad Thai was also the best I tasted anywhere on our travels.

Depending on the operator, tides and weather conditions, the tour will take you to Maya Bay (it of The Beach fame, but without the man eating sharks and with more speedboats), Koh Phi Phi Lay, Koh Phi Phi Don (where we had a set lunch at the restaurant), Monkey Island (watch your stuff!), Bamboo Island and Mosquito Island (a total misnomer). Non-alcoholic drinks and lunch are included and at Bamboo Island you also have fresh fruit and Krabi cake 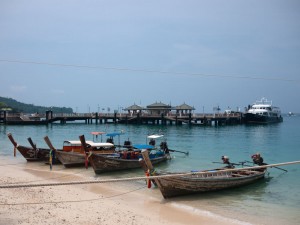 (which you might have to share with washed up locals). We snorkelled off Phi Phi and Mosquito Island and I can honestly say it was one of the most magical experiences of my life! (I should add though that when it comes to snorkelling I am relatively easily pleased as my only other experience with it involved a two minute excursion with a leaky mask, a nasty black sea urchin and an ex off the coast of Natal.) I’m not sure where the area rates on a global scale in terms of snorkelling (the coral would be right down there – it’s just various shades of brown really), but for me it was the candy store of the sea and I was the little kid. Just the different varieties of parrot fish were enough to turn me into THAT person on the boat that has to be poked with a long stick because everyone else is waiting on board and they haven’t looked up long enough to see that they must come in out of the water. After a day of snorkeling, marveling at the sheer number of tones that the colour turquoise comes in and lying on the beach they will get you back to the hotel early enough for happy hour, so that you can watch the sun set over the bay while you sip on two-for-the-price-of-one cocktails. All for around R780.00 per person for the whole day. 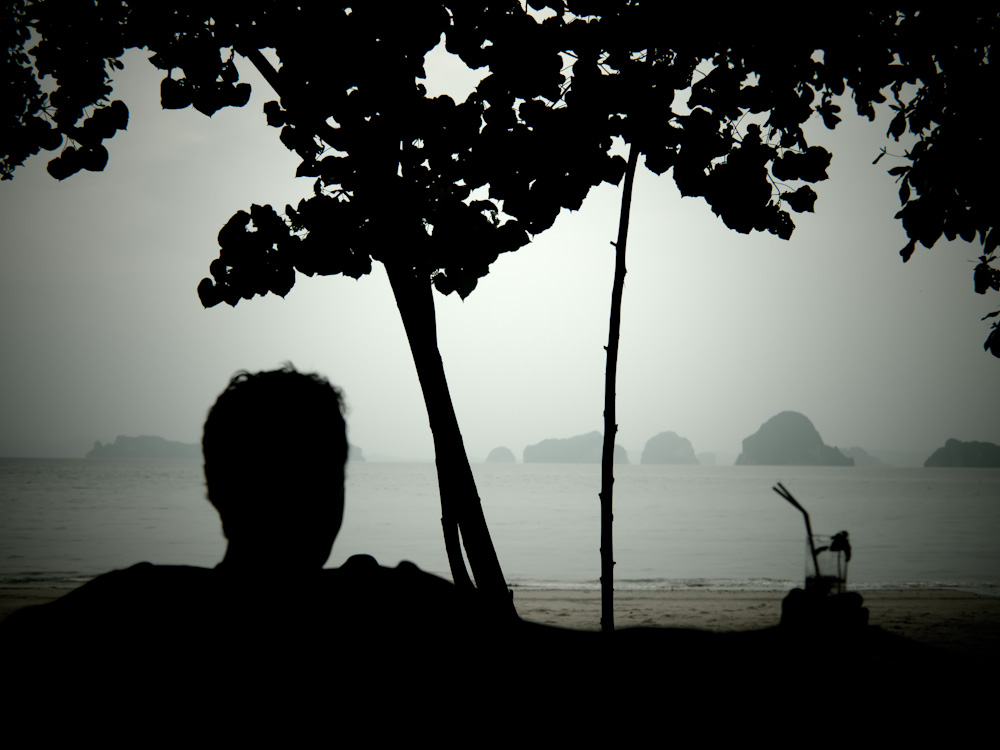 Back at the hotel, dinner at the Arundina is sublime. You literally sit with your feet in the sand (should you choose), with the only sound other than the sea coming from the discreet local band providing quiet background music to set the tone for your meal. As with breakfast and lunch there are a generous number of Western and Thai options. So you can be adventurous with Fresh banana flower salad with peanut, roasted coconut and chilli or Tubkaak style deep-fried chicken served with papaya salad and sticky rice or stick to a more conservative Pan-fried sea bass served with mixed grilled  vegetables and garlic white wine sauce. The Homemade shrimp and lobster-spinach ravioli in a light blue cheese and tomato sauce (it was “or”, but they are very eager to cater to your every culinary whim) was also delicious. Everything was delicious. I didn’t eat a single thing here that I didn’t absolutely love!

The Tubkaak has a spa (which, amongst a long list of other treatments, gives the type of Thai couples massages that will make you forget how your legs work), a large pool and its own private stretch of beach where you can lounge on bean bags all day, snorkel in the  sea or paddle around in a kayak. (I quite like the idea of the bean bags. Loungers are all smooth 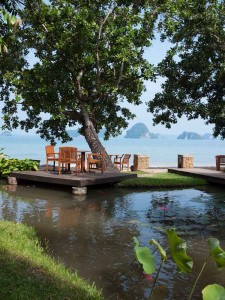 and sleek, the better to contrast with your burgeoning “must try all things Thai” body, while the bean bags are sort of big and lumpy, making you look sleek and svelte by comparison.) Cocktails are served on the beach, so there is no reason to not spend at least one entire day just relaxing right here. And when you’ve had your fill of relaxing (not likely) and are ready to head to Phuket, the hotel will drop you off safely at the bus terminal from where you can take a bus to Phuket for a mere R35.00 per person, or use the hotel’s shuttle for around R800 for a charter right to your next hotel’s doorstep.

Getting there:  Thai Airlines and SAA fly direct to Phuket and Bangkok from Johannesburg, but when we went Singapore Airlines was by far the cheapest. You have a layover at Singapore’s Changi Airport, but that in itself is such an experience the detour is no hardship. If you land early enough (you have to register by 3PM) there is a shuttle that will take you on a tour of the city. There’s a butterfly garden, orchid garden, cinema, 3D experience, massage chairs and loads of other entertainment.