There is always one major concern that I think most of us food loving people have when we try a new restaurant in our area.The worry is this: What if they’re good, but they don’t make it? And after a long and lazy lunch at Royal Siam Thai at Milkwood Village in Wilderness, I was very worried indeed. As I have mentioned before, being a restauranteur in the Garden Route takes balls. We are a fickle, lazy, unadventurous bunch and I can just imagine the legion of clientele who would not return because they can’t pronounce half the dishes on the menu. (“Where’s the crumbed calamari starter and steak with mushroom sauce?”.) But if you’re not the type of person who’ll worry about sounding like you’re ordering an overweight exotic prostitute when all you want is Phad Thai, then you will absolutely love this place! The food is utterly delicious. That perfect Thai combination of sour, salty and sweet is zhushed up with the heat intensity of your choice if you like it hot. The menu is extensive with a huge array of starters and I could happily spend an afternoon there just working my way through prawn tempura, springrolls stuffed to bursting with generous portions of duck and fresh veg, satay and crispy, juicy wontons. I forwent the Tom Yum soup as it never particularly appealed to me the few times I’ve had it in other places before, but if you really want a taste of hot and sour the way the Thai’s do it, then this is the dish to have. Predictably, what I really wanted to try was their Phad Thai – you don’t judge a seafood restaurant on the quality of their salad buffet. I became addicted to this most quintessential of noodle dishes in Thailand and attempted it myself one evening for friends with fairly disastrous consequences. If you don’t get the flavour balance just right, then it’s all wrong. Like going off sushi after combining it with too many blue drinks at a roll-your-own dinner party one night, I had managed to completely put myself off something I had previously loved. But the only way Royal Siam’s Phad Thai could’ve tasted any more authentic is if I’d had a lady boy passing me serviettes while (s)he complained about how the heat was making h(er)is mascara run. The balance between sweet, sour and salty combined with the plump prawns and more-ish peanuts was simply sublime. The Thai Red Curry Adam had was beautifully fragrant and was a really silly thing for him to order considering how easy it was for me to just dunk my spoon in there for a taste whenever he looked away. Utterly scrumptious. I was rather devastated when, at the end of the meal, I realised I had eaten so much that there was no place for deep fried ice cream. In fact, I was rather miffed that I didn’t have four stomachs like a cow so I could try more of the dishes on the menu! Massaman curry (traditional curry with coconut milk and peanuts), Phlaa Goong (Thai salad with prawns, lemongrass and mint), Happy Duck and Angry Duck (who wouldn’t want to order these just to see the personality differences?), Garlic Pepper Prawns and How Mok Talay (a steamed seafood curry terrine with sweet basil) are just a few of the many dishes on the menu. 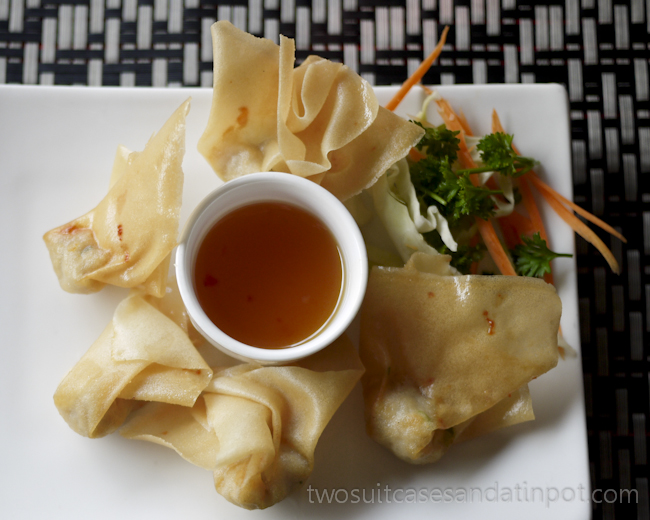 Unlike the unflattering fluorescent lights and plastic chairs that look like they’re made for Lego man proportions that usually accompany any authentic Thai meal, Royal Siam is an opulent blend of warm reds, sensuous blacks and soft lighting. You also don’t have to worry if you can’t use chopsticks – in true Thai fashion, food is eaten with a fork and a spoon. The wine list is small, but reasonably priced (as are all the items on the menu) and there are a few Thai beers like Tiger and Singha. This is definitely the place to take as many of your friends as possible, order one of everything off the menu and eat and share with abandon.