I don’t like veggies. At all. When Jessica Seinfeld appeared on Oprah with tips on how to get your kids to eat veggies, I was frantically taking notes. For myself. I eat them only because I have to and then grudgingly so. So I don’t know if it was with this energy that I went grocery shopping and whether the poor, shunned veggies could sense my reticence, but this recipe turned out disastrous. I don’t know why really, because despite not liking the ingredients in many other forms, I am rather partial to a good ratatouille. Which probably proves that veggies are not as intuitive as we might think they are. I have been eying the gorgeous, glossy Chinese aubergines (which are longer than regular aubergines) for some time now, and ratatouille seemed like the perfect way to try them out. I don’t know where I got this recipe from originally, but it’s supposed to be the recipe that Remy made in the movie Ratatouille. I don’t know whether that’s true (or as true as it can be, considering the claim is that an animated rat made a traditional French dish), but I do know that it’s a really good one, which is why it still tasted fantastic despite a slew of cockups. The first time I made them I did them in individual ramekins and unmoulded them to serve. 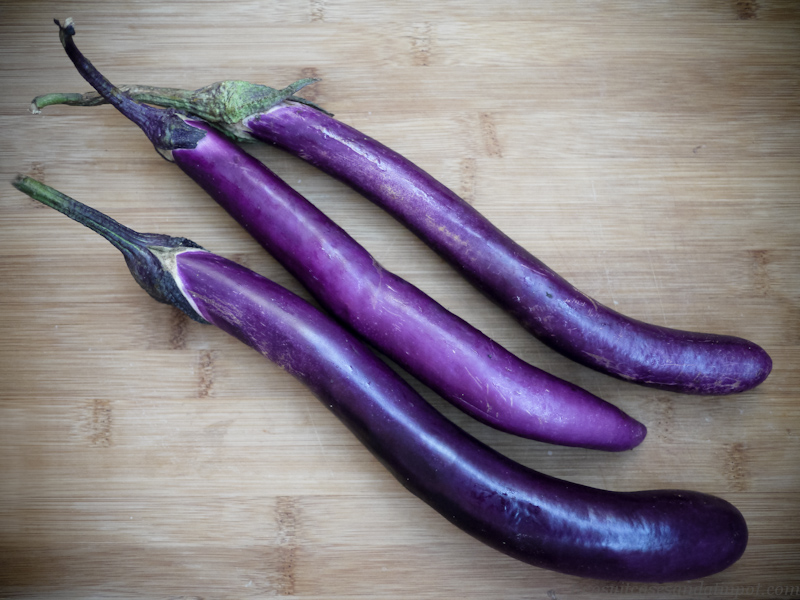 For the piperade (bottom layer):

Remove all ingredients from the fridge. Read through the recipe and realise that it says cooking time is about 2 hours and you have 45 minutes before dinner is served. Pour yourself a large gin and tonic. Pop the one red, slightly shriveled (cause it’s been in the fridge for so long) pepper you have in the oven and grill until caramelised. Skin and chop finely. Fry the onions (two whole ones, because you now have to make up for all that pepper you don’t have) in the oil until it too is caramelised. Everything’s better when it’s caramelised. Add a tin of tomatoes (because you’re too lazy to peel and seed 3 measly tomatoes) to the pot. Realise the tin of tomatoes you thought you had is no longer there, so chop up three tomatoes, skin, seeds and all and add to the pot. Add the garlic which should’ve gone in ages ago, salt and bay leaf and leave to simmer.

Slice the aubergine and zucchini into 3mm slices to just simmer in the sauce because you’re running out of time. Realise that the punnet of what you thought was zucchini is actually 5 cucumbers. And they’re not even the burpless kind. Damn your inability to read Chinese characters! Pour another G&T. Double the quantity of aubergine as you now have no zucchini. And you also forgot to get the squash. And you’ve used up the last of the tomatoes for the piperade, so there’s none of that either. Add the aubergine and thyme to the pot and simmer slowly for about an hour. Serve with ricotta gnocchi fried in a little butter till golden. I haven’t even bothered including the recipe here, because ricotta is not easy to find in China and I didn’t think it was all that much better than good old potato gnocchi anyway. 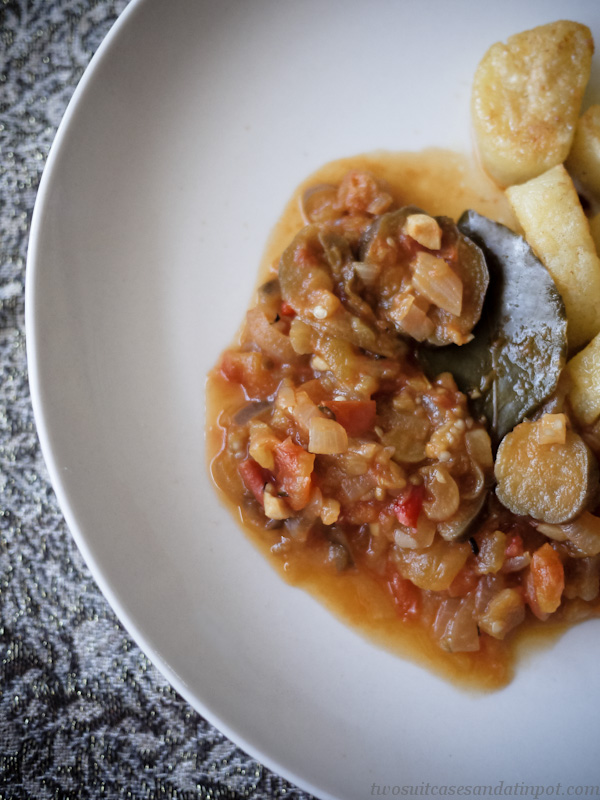 Obviously I didn’t even bother with this as I gave up halfway through step 1. But, should you feel energetic and have at least two hours to spare, the proper recipe follows:

To make the piperade, preheat oven to 450 degrees. Line a baking sheet with foil. Place pepper halves on the baking sheet, cut side down. Roast until the skins loosen, about 15 minutes. Remove the peppers from the oven and let rest until cool enough to handle. Reduce the oven temperature to 275 degrees.

Peel the peppers and discard the skins. Finely chop the peppers; set aside.

In medium skillet over low heat, combine oil, garlic and onion and saute until very soft but not browned, about 8 minutes.

Add the tomatoes, their juices, thyme, parsley and bay leaf. Bring to a simmer over low heat and cook until very soft and little liquid remains, about 10 minutes. Do not brown.

Add the peppers and simmer to soften them. Discard the herbs, then season to taste with salt. Reserve a tablespoon of the mixture, then spread the remainder over the bottom of an 8-inch oven-proof skillet.

To prepare the vegetables, you will arrange the sliced zucchini, eggplant, squash and tomatoes over the piperade in the skillet.

Begin by arranging 8 alternating slices of vegetables down the center, overlapping them so that 1/4 inch of each slice is exposed. This will be the center of the spiral. Around the center strip, overlap the vegetables in a close spiral that lets slices mound slightly toward center. All vegetables may not be needed. Set aside.

In a small bowl, mix the garlic, oil and thyme, then season with salt and pepper to taste. Sprinkle this over vegetables.

Cover the skillet with foil and crimp edges to seal well. Bake until the vegetables are tender when tested with a paring knife, about 2 hours. Uncover and bake for another 30 minutes. (Lightly cover with foil if it starts to brown.)

If there is excess liquid in pan, place it over medium heat on stove until reduced. (At this point it may be cooled, covered and refrigerated for up to 2 days. Serve cold or reheat in 350-degree oven until warm.)

To make the vinaigrette, in a small bowl whisk together the reserved piperade, oil, vinegar, herbs, and salt and pepper to taste.

To serve, heat the broiler and place skillet under it until lightly browned. Slice in quarters and lift very carefully onto plate with an offset spatula. Turn spatula 90 degrees as you set the food down, gently fanning the food into fan shape. Drizzle the vinaigrette around plate. Serves 4.