“Duōshǎo qián?” I say with a raised voice, stabbing a finger at my open purse, not quite believing that this is actually happening again. I am back in Shanghai and totally incapable of being understood when I try even the most simple of phrases in Mandarin. How am I failing so dismally at this? Ten years after living there I can still order 500 grams of pork sausage or two first class train tickets to Warsaw in Polish, but I cannot remember how to ask for something in Mandarin for longer than it takes me to switch off the AC and find my room key on my way out to test the new phrase.

Mandarin is notoriously tricky to learn. Besides the obvious difficulty of having to deal with hanzi characters instead of the Latin alphabet – rendering the use of a well thumbed dictionary effectively useless – Mandarin has four tones, creating a mine field of possible mispronunciations and embarrassing situations. It also has a large number of homophones. The sound “shì”, for example, is associated with over thirty distinct morphemes. I have also discovered that learning a language completely on your own, without a bilingual person to help you out, makes things considerably harder. No matter how wrong you’re getting it, the electronic voice on your learning program of choice will assure you that you’re doing a stellar job even if you’re mangling the language. But even so. You’d think I could get the basics right, right? At least to enable me to do some simple shopping, right? Wrong. 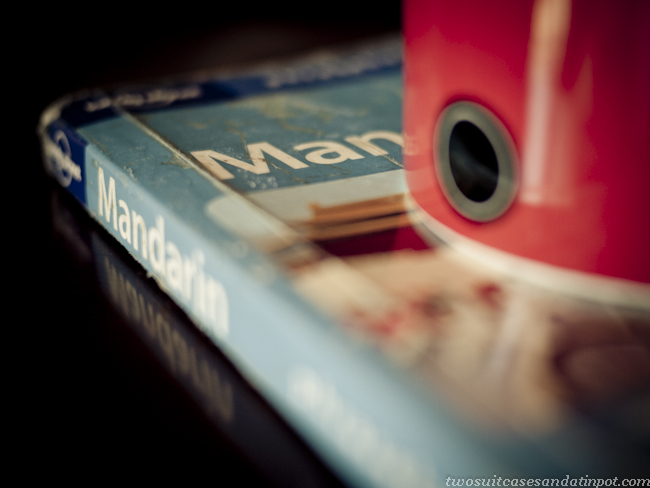 But it makes a handy coaster.

Once I realised that I would not be fluent in Mandarin in the three months I’d set as my goal, I decided to focus on a phrase a day. Bite sized chunks that I could perfect before moving on to the next thing. Today’s phrase was to be “How much is it?”. A second attempt at a simple sentence which – in a country where just about every price is open to negotiation – I would be sure to need at some point during the day, and therefore a good choice if I wanted to practice it a bit in a real life situation. I listen to the phrase on Jibbigo, try to visualise the pinyin characters and repeat it over and over again like a slow Chinese Rain Man with a speech impediment. I check myself by testing it on my translator and it ensures me that I am, indeed, saying “How much is it?” in Mandarin that is at least passable enough for my iPhone to understand. I leave the room, walk to the elevator, stop and turn back. I let myself back into the room, check the phrase book again just to be sure and repeat it three more times. Having satisfied the linguistic obsessive compulsive in me, I make my way down to the establishment on the corner. One of those Chinese shops (although here it’s just a shop) where you can buy everything from a packet of crayons to a yellow g-string with a chicken beak attached to the front where your willy goes, should you be that way inclined. I grab a set of earphones (the packaging ensures me they’ll “make exquisite sound for excellent life”) and head for the counter. Now at this point, as the shopkeeper rings up my purchase and everyone knows what is expected of them, I should just look at the amount indicated on the till, pay and leave. But no. I open my purse, tilt my head to indicate I am in questioning mode while holding it open, and say  “Duōshǎo qián?”. He freezes, looking at me like I’m speaking Greek. I’m not, am I? I’m pretty sure this is Mandarin. My phone told me so. I can’t have gotten it that wrong surely? And to help him put my question into some context and better understand what I’m trying to ask, there are visual clues. I’m in a shop. I have handed over an item I wish to purchase. I am holding open my purse, nodding to the yuan lying in there and deploying the international hand signal for money by rubbing my thumb and fingers together. If I were playing a game of charades, even a dim witted Labrador with bad vision would get “Lady asking for price” by now. He has not. He shouts for his mom in the back and she joins him. A short conversation and some nervous glances between them follows and they turn back to me, staring at my purse like a paper snake will pop out of it at any second. Determined not to give up until I either get it right, or someone puts two and two together and helps me with the correct pronunciation, I repeat “Duōshǎo qián?”. The mother throws her hands up and walks to the back of the shop shouting “Ting bu dong” as she goes. I have lost count of the amount of shopkeepers who have just shouted “I don’t understand!” at me and walked away, leaving me alone with their tills and wares, presumably so I can help myself to some sort of Laowain protection money, with the promise of not coming back till next month. They don’t try to help, they don’t try to understand and they are not interested in my amateur mime attempts. They just forgo the sale and leave. “Duōshǎo qián? Duōshǎo qián?” I try one last time, aware now that if I was drawn as an anime character, I’d be the chick with the crazy eyes and frothy mouth who sprays spittle everywhere when she talks. As a last, desperate attempt to get the mad lady out of his shop, the man slowly picks up a beaded Hello Kitty purse from the shelf behind him and drops it in front of me, snatching his hand away quickly. Apparently what he has gleaned from my communication efforts is that my red leather Busby purse isn’t blingy enough around these parts and could he possibly be so kind as to suggest an upgrade? I stare at the shopkeeper for a few more seconds, slump my shoulders, hand over what I assume is a sufficient amount, wait for my change and walk out of the shop feeling defeated.

And that is why I am giving up on Mandarin. No man is an island until he tries to learn Chinese in China.