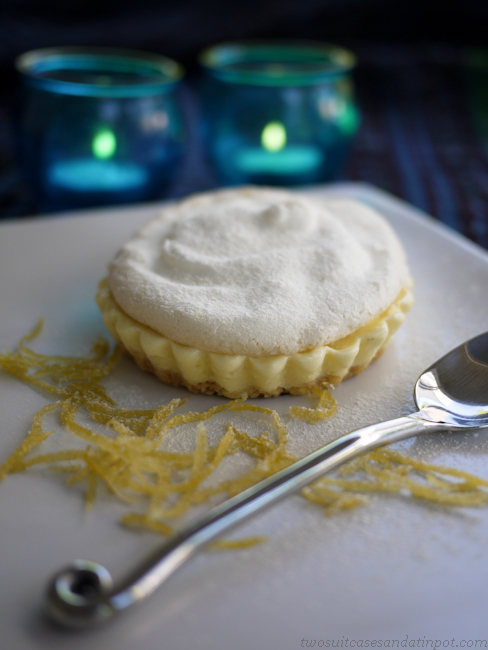 For the ice cream

Heat the milk to just before simmering and remove from the heat. In a bowl, whisk the yolks and sugar together until light and fluffy. Slowly (slowly now, or you’ll be sorted for tomorrow’s scrambled eggs*) pour the milk into the egg mix and whisk quickly as you go. This next part is a bit annoying. Grab a book and take a few deep breaths because yes, it does take a while (fifteen to twenty minutes, but it feels like an hour) but no, you can’t walk away, even for a minute. Return the pot to a low heat and stir constantly until the mixture thickens to the consistency of thin custard. Do not boil*! Stir in the vanilla essence and lemon juice and set aside to cool. In another bowl, whisk the cream till soff peaks form. Slowly fold the custard into the cream, combine well and place in the freezer overnight. As I said, the nice thing about this recipe is that it does not usually require you to break up any ice crystals like you normally have to do if you don’t have an ice cream maker. But just to be sure, check the ice cream in a few hours time and if there are any ice crystals, either whisk before it is fully set or blitz up with a stick blender.

For the candied lemon rind

Half a cup of sugar

Place the zest and sugar in a pot and add a cup of water. Simmer for 45 minutes until the zest is translucent and the mixture is the consistency of thin syrup. Remove the strands of zest and place on a silicone mat to dry, separating them as much as possible. Once cooled and firm, toss in a little castor sugar, cover in cling wrap and set aside.

For the biscuit base

Combine the biscuit crumbs and butter and mix well. Press the mixture into the base of your tart tin(s) – the base should be 3 to 4mm thick. Cool in the fridge.

Preheat oven to 150˚C. Beat egg whites with salt and cream of tartar until stiff. Add castor sugar by the spoonful, beating well between additions and adding the essence just before the last two spoonfuls. Line a baking sheet with a silicon mat and spray with Spray & Cook. Shape the meringues on the baking sheet so they’re slightly smaller than your tarts – they’ll swell a bit. Alternatively (and the easier option) pipe small meringues. Bake for 30 minutes or so until lightly golden. The meringues will be chewy on the inside. Allow to cool and then lift with a spatula.

Remove the ice cream from the fridge and soften slightly. Spoon ice cream into the tart moulds, pressing down onto the biscuit base and ensuring there are no air bubbles. Smooth the top with the back of a knife and return to the freezer for at least a couple more hours or until you’re ready to serve. To serve, unmould the ice cream and top with the meringues in whichever way you fancy. Serve with the candied lemon zest.