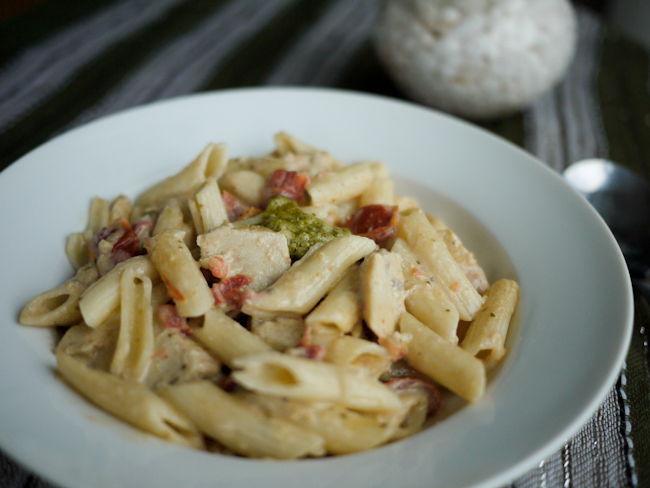 Necessity is most definitely the mother of invention. And when you live in China, but steadfastly insist on eating like you’re still back home, you have to get inventive pretty damn quick. Shanghai is an amazing city to live in. You can immerse yourself in Chinese culture, customs, life and food or you can go for days here without living in China. If you know where to look, you can get your hands on pretty much every comfort from home. But as Qingpu is the Western most district in Shanghai, getting a sudden craving for one of my favourite Verdicchio’s pastas could easily result in a three hour round trip to track down the ingredients. Take sun-dried tomatoes. They may be soooo 1990, but when no one is watching, we all still love them. But when I wanted to whip up this sun-dried tomato containing pasta a little while ago, I quickly realised that the Chinese are very à la mode, because I couldn’t find them anywhere. What to do? Even if I had a lovely, sunny patio, the searing temperatures and high humidity meant I’d be left with a scene more resembling a week old DB on CSI than anything you’d want to chop up with some chicken. So I settled for the next best thing – tomatoes completely untouched by the sun, but still oh so good. Possibly better, actually.

To make the oven dried tomatoes I halved about 750g of fairly large (for a cocktail) cocktail tomatoes, sprinkled them liberally with salt – about 1 tablespoon full – and placed them in a strainer for an hour so that any excess juices could be extracted. Then I arranged the tomatoes cut side up on an oven tray and left them in the fridge for a few hours to dry out further. (Overnight would be even better.) I then baked them in a 100ºC oven for three to four hours, until they had more than halved in size. I didn’t dry them till they were completely devoid of any moisture. Instead, I stopped when they were still slightly plump. More like a sun-blushed tomato (and therefor once again fashionable). And oh, my, word. They were fabulous! So much flavour and none of those icky chewy bits you get in bags of sun-dried tomatoes. Keep in mind that because these tomatoes aren’t completely dried out, they need to be refrigerated and will last for up to a week. But they freeze like a dream too.

Once I had my tomatoes sorted I could make my chicken pasta with sundried tomatoes and basil pesto.

1) Slice two chicken breasts into strips, dust with seasoned flour and brown in a bit of oil till almost done, but still slightly pink.

2) Add two cloves of crushed garlic and stir through for a minute. Glug in a bit of white wine if you have on hand, but don’t worry if you don’t.

3) Add about three quarters of a cup of sundried tomatoes (less if you’re using very dehydrated ones), roughly chopped, and 3 heaped tablespoons of basil pesto. Allow to simmer till slightly thickened, adjust seasoning and serve tossed with penne or your favourite pasta. Loads of flavour with minimum effort. This sauce goes particularly well with gnocchi.

Oven dried tomatoes: Before and after.

My food photography has been really shite of late. Fluorescent hotel lighting, tiny Chinese plates bought from an alley shop and laminated table tops sans props do not make for good food styling opportunities. My husband has suggested trying something completely different. Like balancing a plate of food on a Pilates ball (or my head) for interest. While I don’t want to knock down any of his ideas, I think I’ll just stick to crappy shots of badly lit food. At least you get the idea, right?