On hairy crabs: My dismal failure 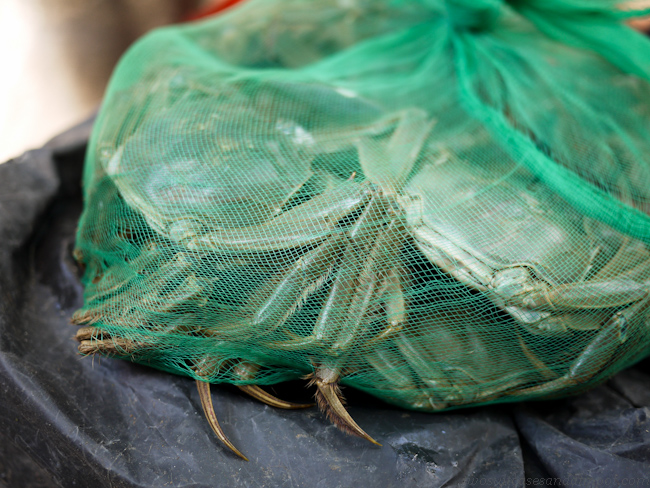 I was going to do it. I really, really was. Last night was the night I was going to buy, render unconscious and cook the flavour of the month: shanghai hairy crabs. These burrowing crabs, also known as mitten crabs, are so named for their furry claws that look like mittens. Come Autumn, these crabs hit the streets. Not in their finest gear, ready to party the night away, but fighting for space in green nylon bags in every smelly wet market and on various street corners throughout the city. People get totally crab bedonderd round about now. And naturally, I had to partake in the festivities! Live like the natives and all. So yesterday, full of bravado, I headed for the wet market ready to hunt down and bring home all the makings of a fine Shanghai meal. Well. If the first thing out of your mouth when you see your dinner is “Awwwwwww”, you know it’s probably going to be McDonald’s for you. I mean, they’re just so cute! They really look like little green alien babies, trying to keep their claws warm in little furry mittens. Once a crab has the dubious honour of being selected as chow, the stall (2 polystyrene coolers and maybe a scale) holder deftly grabs it out of the bag, folds in the legs and binds the whole thing with twine so that it can’t make a quick getaway. The entire process takes all of 5 seconds. I asked the friendly, elegantly dressed customer next to me how much they cost and she said RMB6 for one. (At least, I think that’s what she said? It was either that or “Sharp, my bru”, the hand signal for which is the same as 6 in China). That’s less than a dollar a crab. Damn, that’s cheap! They’re looking tastier already. And a local had told me the price, so there would be no laowai tax imposed. Being ripped off was another concern. (I am the world’s worst haggler. Once, in a market in Bangkok, I had already “negotiated” the price for a dress and upon handing the money over, the guy actually gave me a few baht back with a pitying look on his face!). But that was now taken care of. There really were no more excuses left, so it was time to choose which crabs I wanted. Now, here stories will differ depending on who you ask. The other customer would say it is all my imagination and she didn’t see a thing, but I swear, the first crab I picked up looked up at me with dark, sad eyes (just like Puss-in-Boots if his eyes had been on stalks), and it’s lower lip started quivering, tiny bubbles frothing out of it’s mouth like a death rattle. A tiny, furry claw reached out to me as if to gently touch my cheek, and I swear I could hear a little chorus of voices pleading “You are our only hope.” I gently placed the crab back where I found it, muttered something about it still being a long way to Qingpu, and shuffled off with my tail between my legs.

Fortunately, there’s a McDonald’s right at the bus stop on my way home. 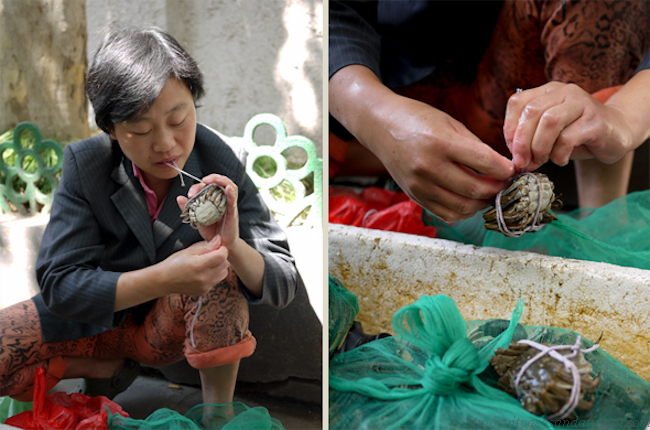 But no worries! I awoke with new gusto this morning. A steadfast determination to make these crabs my bitch. The way I figured it was thus: The sooner I ensure the untimely demise of 6 of these crustaceans, the sooner I will be relieving them of their misery. Right? I mean, at least they won’t land up in a live hairy crab vending machine, destined to wait it out in a 5 degree fridge till someone with a few yuan comes along and pulls the lever, right? Right. This would be a good thing. I would be doing my share to make the world a better place. I decided that instead of braving the sad faces in the wet market, I would head to my nearest supermarket. Here the crab is kept cold, so they’re already in a state of semi-hibernation, and so would be less likely to make a last stand. Sure enough, hairy crab was the first thing I saw as I got to the fish counter. (It was also almost four times the price for the same size as the previous day’s leading me to wonder whether the helpful shopper really was just saying “Sharp my bru.”). Already trussed up and nestled in still rows on a bed of ice, it was easy to tell myself they were already dead. All I had to do was see who the little boys are and who the little girls are to ensure I get three of each. You see, the battle of the crab sexes is a hotly debated topic in Shanghai, with long arguments over decimated piles of crab over which sex has the sweetest meat and richest roe. The females usually win out, but I had to try for myself. So, all self congratulatory because I know to look for these differences before making my purchase, I picked up a crab and flipped it over… The crab was not dead. It was not even sleeping. Two little black eyes stared up at me as a wayward leg came loose from the twine. Flailing it’s furry mitten around wildly the little chap (or chick, I didn’t even get a chance to look) shouted “She’s saved me! I’m free!” before it tried to air swim away. Okay, not really. But it might as well have for how it made me feel like I’m the world’s worst human being, single-handedly responsible for the sad depletion of our oceans. I tucked the little leg back in the twine, put him back on his ice bed while muttering an apology to him, his brethren and their lady friends, and slunk off to the butchery.

So I am left shamefacedly writing this post, drowning my sorrows in a glass of whiskey while my husband cooks the neatly packaged pork rashers I bought as a substitute. I guess drunken shrimp is off the menu then.