Of jellyfish, old eggs and other things to eat. 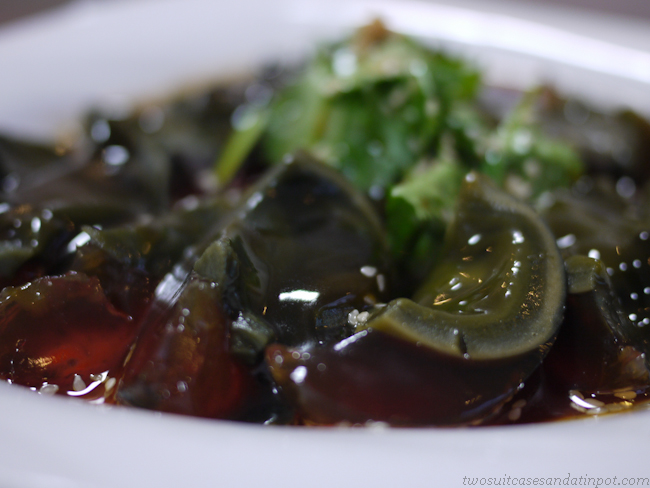 As I mentioned in my previous post, this weekend I finally got around to trying century eggs, chicken feet and jellyfish. I have had a punnet of preserved duck eggs sitting in the fridge for weeks now and just haven’t had any ideas on what to do with it. The only recipe suggestion I could find was century eggs with silky tofu. Ew. But when it was served to me on a plate on Saturday night I had no more excuses. Ditto with the chicken feet and jelly fish. Chicken feet are ubiquitous around here. They are available on the street as a deep fried, boiled or battered snack and they are plentiful at the supermarket, both fresh and frozen in open cases at the butchery as well as vacuum packed in the snack aisle. Jellyfish too are available at the fish counter and vacuum packed as a snack. But unlike those sneaky chocolate bars that slip into your trolley as you pass through the snack aisle, chicken feet and jellyfish don’t exactly jump off the shelf at you now, do they? As I pointed out to my husband the other night when a tiny, disorientated beetle took a nose dive into a boiling pot of pasta I had on the stove, our perception of what is acceptable to eat is almost entirely a state of mind. I have no problem wolfing down a platter of prawns, legs and all, but I would spend ten minutes trying to fish the now partially disintegrated beetle out of the pasta. By the time I got it out I actually needed the crunch it would’ve provided as by then the pasta was overcooked and nothing was “too the tooth”. It was just the idea of eating this beetle. Big, fat, bug-eyed cockroaches of the sea? No problem. Flying insectile sources of protein? Hell no! 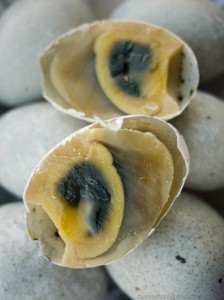 I think these might be off, but how would you even know??

Which brings me to the century egg. To be honest, if you had blindfolded and fed it to me (blindfolded me, not the egg) and told me it was a hard boiled egg with a bit of cream and beautifully ripe Camembert inserted into the centre for a creamier yolk with a delicate ammonia flavour I would’ve loved it and declared you a Heston Blumenthal-esque genius. Because that is exactly what it tasted like. Just a little more sulfurous. But it isn’t a hard boiled egg with a creamy center now, is it? It’s a raw egg, immersed in a mixture of clay, ash, salt, lime and rice hulls for anything from a few weeks to several months. This turns the egg white into a firm, translucent, dark brown jelly and the yolk a grey-green, creamy consistency with a slight sulfur and ammonia taste. I tried the egg white first and it didn’t taste like much – pretty much like a very firm, boiled egg white. Then I tried the yolk on it’s own and I really struggled to keep it down. I don’t know why! The flavour was creamy and delicate and everything but my eyes told me it was something I should love! But as I took the second bite, getting a bit of everything in, some of the green yolk sort of glooped off the chopstick on to my plate and I was done. I really am rather disappointed with myself on this one I have to tell you. Century eggs (quail, chicken and duck eggs) are available everywhere and can be bought singly as a vacuum packed snack, by weight or prepacked in punnets. They are also labelled as preserved eggs. 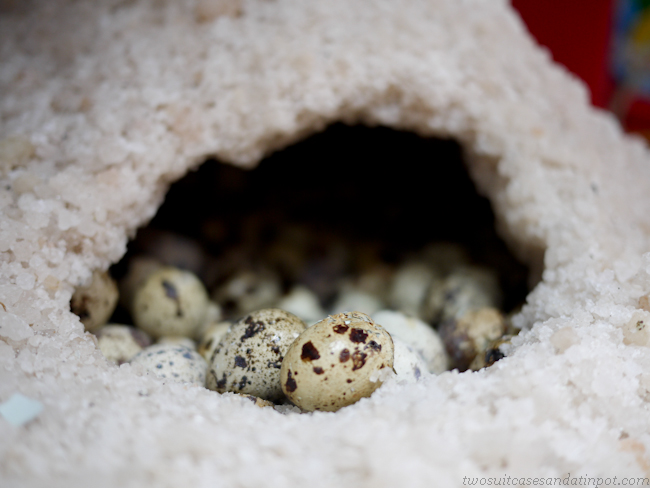 Preserved quail eggs at a market.

The chicken feet were a bigger success. I’ve suspected all along that I’d actually like them as one of my many secret shames is that that little gristly bit on the end of a drumstick is my favourite part of the chicken. But when it comes to animal bits, what puts me off is the package deal. Chicken feet on their own are fine. Chicken feet still attached to the chicken, not so much. So when you’re standing in the butcher, contemplating the chicken feet right next to other chicken feet still part of a whole chicken, you have one of those “Usual suspect” moments. You look at the feet, you look at the chicken, you look at the feet… Wait… The feet… are part of the chicken! I need to get over this. After all, as a South African the concept of “walkie-talkies” (chicken feet and heads) is not foreign to me, even though it is not a staple of the average white South African. Personally, I think this should change because, as I suspected, I liked the chicken feet. Not so much how they were served on Saturday night (boiled and then served cold with chillies and vinegar), but nibbling those little gristly bits off was really good, and I can quite imagine myself working my way through a big pile of roasted chicken feet washed down with an ice cold beer. 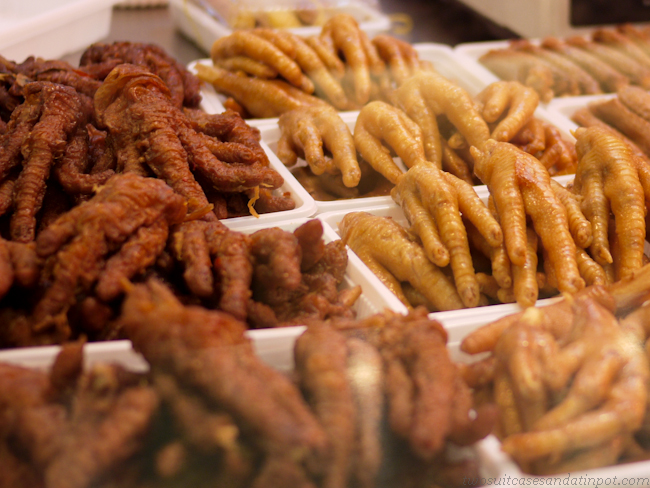 Looks good right? I’d klap that with a beer!

As for the jellyfish, you might as well find the dullest person around and ask if you can nibble his ear a bit. Tasteless with a sort of squeaky crunch. A bit like trying to chew that rubber skeleton toy we all had when we were kids, just with some sesame oil and a bit of soy. I am dumbfounded as to why anyone would eat this. I will try it again though, just to be sure. And as with all things, you shouldn’t take my word for it either. Who knows? Century eggs and jellyfish could just be your dream meal!